John Hay was an American statesman, diplomat, author, journalist, and private secretary and assistant to Abraham Lincoln.  He lived on Cleveland’s Euclid Avenue on “Millionaire’s Row” and is buried in Lake View Cemetery.

John Hay began as a private secretary and assistant to Abraham Lincoln, His highest office was United States Secretary of State under Presidents William McKinley and Theodore Roosevelt. Hay was also an author and biographer, and wrote poetry and other literature throughout much of his life. 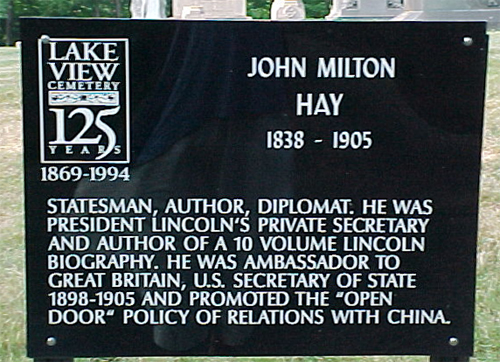 Throughout the American Civil War, Hay was close to Lincoln, and stood by his deathbed after the President was shot at Ford’s Theatre. In addition to his other literary works, Hay co-authored with John George Nicolay a multi-volume biography of Lincoln that helped shape the assassinated president’s historical image.

Hay served for almost seven years as Secretary of State under President McKinley, and after his assassination, under Theodore Roosevelt. Hay was responsible for negotiating the Open Door Policy, which kept China open to trade with all countries on an equal basis, with international powers. Hay also cleared the way for the building of the Panama Canal.

By 1873, Hay was wooing Clara Stone, daughter of Cleveland multimillionaire railroad and banking mogul Amasa Stone. The couple moved in June 1875 to Stone’s ornate home on Cleveland’s Euclid Avenue, “Millionaire’s Row”, and a mansion was quickly under construction for the Hays next-door.

On December 29, 1876, a bridge over Ohio’s Ashtabula River collapsed. The bridge had been built from metal cast at one of Stone’s mills, and was carrying a train owned and operated by Stone’s Lake Shore and Michigan Railway. Ninety-two people died; it was the worst rail disaster in American history up to that point. Blame fell heavily on Stone, who departed for Europe to recuperate and left Hay in charge of his businesses.

In October 1879, President and Mrs. Rutherford Hayes came to a reception at Hay’s Cleveland home. When Assistant Secretary of State Frederick W. Seward resigned later that month, Hay was offered his place and accepted, after some hesitancy because he was considering running for Congress.

In 1880, he campaigned for the Republican nominee for president, his fellow Ohioan, Congressman James A. Garfield.

Despite an invitation from the candidate, Hay was reluctant to visit McKinley at his home in Canton. “He has asked me to come, but I thought I would not struggle with the millions on his trampled lawn”.  In October, after basing himself at his Cleveland home and giving a speech for McKinley, Hay went to Canton at last. McKinley won the election easily, with a campaign run by himself and Hanna, and well-financed by supporters like Hay.

When McKinley was assassinated, Hay was next in line to the presidency, so he remained in Washington as McKinley’s body was transported to the capital by funeral train, and stayed there as the late president was taken to Canton for interment.

He wrote to a friend, “what a strange and tragic fate it has been of mine—to stand by the bier of three of my dearest friends, Lincoln, Garfield, and McKinley, three of the gentlest of men, all risen to be head of the State, and all done to death by assassins”. 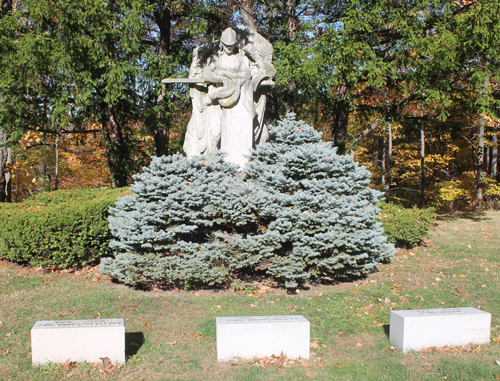 Hay was interred in Lake View Cemetery in Cleveland, near the grave of Garfield, in the presence of Roosevelt and many dignitaries, including Robert Lincoln. 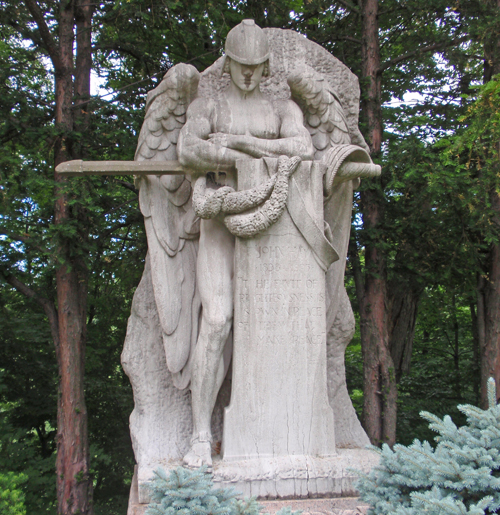