Outhwaite Homes is a public development under jurisdiction of the Cuyahoga Metropolitan Housing Authority in Cleveland, Ohio.

Outhwaite Homes was built in 1935 by architects Edward J. Maier, Travis G. Walsh, and Leo J. Barrett and possibly named after Joseph H. Outhwaite, it was the first federally funded public housing in the Cleveland area and one of the first in the U.S. 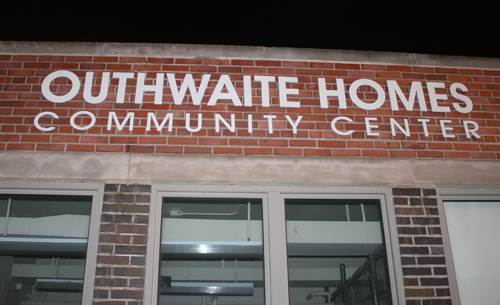 At the time of its opening, rent was listed at $4.78. The 100-plus-unit complex at East 55th Street and Woodland Avenue, like other housing developments in the CMHA, provides residential housing for low-income families in the eastern section of downtown Cleveland.

Two famous Cleveland brothers, Louis Stokes (US Congressman for over 28 years) and Carl Stokes (first black mayor of a major US city 1967) were among the first residents of Outhwaite.

Sara J. Harper (born August 10, 1926) is a former member of the Eighth District Court of Appeals.  Judge Sara J. Harper founded the Sara J. Harper Children’s Library in 1992 at CMHA’s Outhwaite Homes on East 43rd Street. Judge Harper grew up in the estates along with Carl and Louis Stokes. She is the first black woman graduate of the Case Western Reserve University Law School; the first woman to serve on the judiciary of the U.S. Marine Corps Reserve; one of the first two women to win a seat on the Ohio Court of Appeals; and the first black woman to sit by assignment on the Ohio Supreme Court. The mission of the library is to provide a safe environment that encourages and promotes reading, learning, and positive avenues for self-realization.