The 1924 Republican National Convention was held June 10–12 at the Public Auditorium in Cleveland, Ohio. President Calvin Coolidge was nominated for President and selected Charles G. Dawes of Kansas for Vice President.

Former Vice President Coolidge had ascended to the presidency after the death of Warren G. Harding in 1923. As the 25th Amendment had not yet been passed, Coolidge served the remainder of Harding’s term without a vice president. The 1924 Republican National Convention was thus tasked with picking a running mate for Coolidge.

Calvin Coolidge was fairly unknown as the vice president and remained rather unknown throughout the rest of that year. His lack of publicity served the Grand Old Party (GOP) well. The Harding administration had faced a great deal of controversy which had guaranteed that he would be dropped from the ticket in 1924. The Teapot Dome and veterans bureau scandals caused the public to lose all faith in the government.

There was debate on whether the convention was going to be held in San Francisco or Cleveland. The deciding factor was a personal endorsement from Coolidge for the city of Cleveland. In tribute to the late President Harding, Coolidge gave his support to Cleveland for it was in Harding’s home state. Besides said endorsement, Cleveland itself had a great deal to offer. The city had a brand-new Public Auditorium, which was near many excellent hotels and attractions, and was able to host 11,500 people. 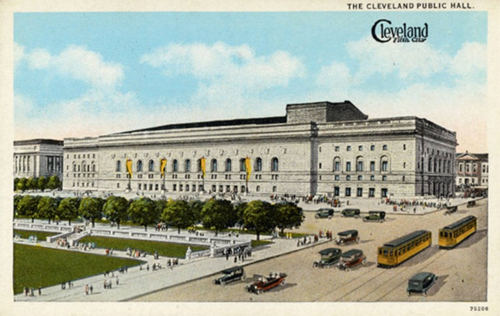 The convention was the first to allow female delegates equal representation with men after women had received the right to vote in 1920.

The convention was also the first to broadcast its proceedings through radio. WTAM broadcast the convention’s speeches and other important elements as far as its signal could reach. There was also much spectacle given to the convention such as fireworks and boat rides given to delegates.

For this convention the method of allocating delegates changed in order to reduce the overrepresentation of the South. This effort proved only partly successful.  More controversy ensued over whether to condemn the Ku Klux Klan with the result ultimately being to say nothing either way. 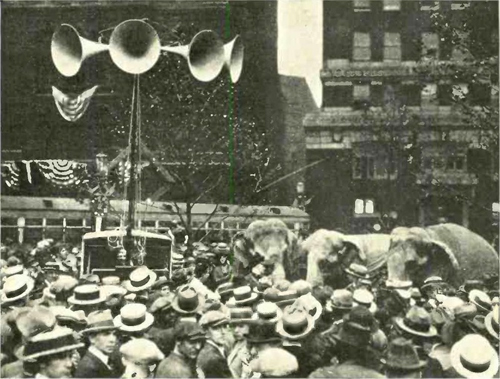 “With a company of elephants to sound a genuine Republican keynote, Cleveland crowds found it easy to get into the spirit of the convention that nominated Coolidge and Dawes by means of this ‘public address system’ that connected with the presidential convention hall.”