The Dr. Robert Smith House, also known as Dr. Bob’s Home, is a historic house at 855 Ardmore Avenue in Akron, Ohio. It is a modest 2-1/2 story Craftsman/Bungalow house in a modest residential area of the city. It was built in 1914, and is significant as the home from 1935 to 1950 as the home of Dr. Bob Smith, one of the cofounders of Alcoholics Anonymous (AA).

It was here that Smith and Bill W. began the meetings that became AA, through which Smith achieved sobriety. The house was listed on the National Register of Historic Places in 1985, and was designated a National Historic Landmark in 2012. It is now owned by Founders Foundation, and is operated by them as a museum dedicated to the history of AA. 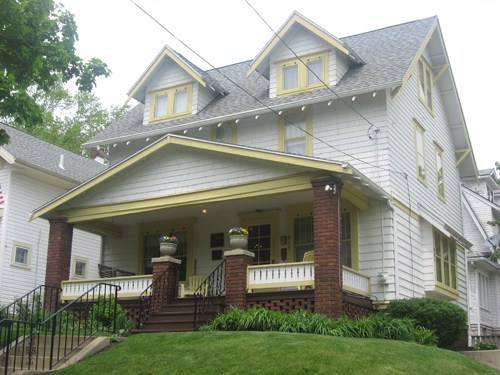 The title of the book Wilson wrote is Alcoholics Anonymous, but it is referred to by AA members as the Big Book. Its main objective is to help the alcoholic find a power greater than himself that will solve his problem, the “problem” being an inability to stay sober on his or her own.
Address: 855 Ardmore Ave, Akron, OH 44302
Phone:(330) 864-1935