In the US, a “Terry stop” is a brief detention of a person by police on reasonable suspicion of involvement in criminal activity but short of probable cause to arrest.

The name derives from  a landmark decision based on Terry v. Ohio, 392 U.S. 1 (1968), in which the Supreme Court of the United States held that police may briefly detain a person who they reasonably suspect is involved in criminal activity; the Court also held that police may do a limited search of the suspect’s outer garments for weapons if they have a reasonable and articulable suspicion that the person detained may be “armed and dangerous”.

On October 31, 1963, while on his downtown beat, Cleveland Police Department Detective Martin McFadden,  saw two men, John W. Terry and Richard Chilton, standing on a street corner at 1276 Euclid Avenue and acting in a way the officer thought was suspicious. Detective McFadden observed the two proceed alternately back and forth along an identical route, pausing to stare in the same store window. Each completion of the route was followed by a conference between the two on a corner. The two men repeated this ritual alternately between five and six times apiece—in all, roughly a dozen trips. After one of these trips, they were joined by a third man (Katz) who left swiftly after a brief conversation. Suspecting the two men of “casing a job, a stick-up”, detective McFadden followed them and saw them rejoin the third man a couple of blocks away in front of a store. 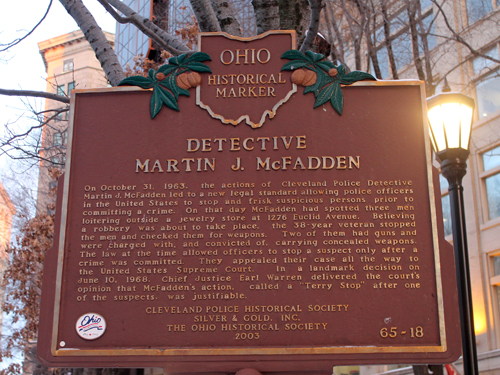 The plainclothes officer approached the three, identified himself as a police officer, and asked their names. The men “mumbled something”, whereupon McFadden spun Terry around, patted down his outside clothing, and felt a pistol in his overcoat pocket. He reached inside the overcoat pocket, but was unable to remove the gun. The officer ordered the three into the store. He removed Terry’s overcoat, took out a revolver, and ordered the three to face the wall with their hands raised. He patted down the outer clothing of Chilton and Katz and seized a revolver from Chilton’s outside overcoat pocket. He did not put his hands under the outer garments of Katz (since he discovered nothing in his pat-down which might have been a weapon), or under Terry’s or Chilton’s outer garments until he felt the guns. The three were taken to the police station. Terry and Chilton were subsequently charged with carrying concealed weapons.

The defense of the charged individuals moved to suppress the use of the seized weapons as evidence on grounds that the search and subsequent seizure were a violation of the Fourth Amendment to the United States Constitution.

Terry and Chilton were found guilty, an intermediate appellate court affirmed the conviction, and the Ohio State Supreme Court dismissed the appeal on the ground that “no substantial constitutional question” was involved.