Ray Chapman was a shortstop who played his entire career for the Cleveland Indians.

Chapman was hit in the head by a pitch thrown by New York Yankees pitcher Carl Mays on August 16, 1920. The game was played at the Polo Grounds. Chapman died 12 hours later. He remains the only Major League Baseball player to have died from an injury received at a major league baseball game. 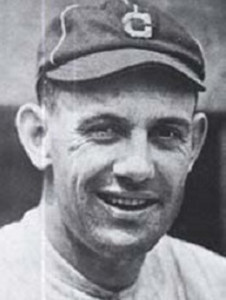 His death led to Major League Baseball establishing a rule requiring umpires to replace the ball whenever it became dirty, and it was partially the reason the spitball was banned after the 1920 season. Chapman’s death was also one of the examples used to emphasize the need for wearing batting helmets (although the rule was not adopted until over 30 years later).

Thousands of mourners were present for Chapman’s funeral at Cathedral of St. John the Evangelist in Cleveland. In tribute to Chapman’s memory, Cleveland players wore black arm bands, with manager Tris Speaker leading the team to win both the pennant and the first World Series Championship in the history of the club. Rookie Joe Sewell took Chapman’s place at shortstop, and went on to have a Hall of Fame career.

Ray Chapman is buried in Lake View Cemetery in Cleveland, Ohio, not far from where his new home was being built on Alvason Road in East Cleveland. It is common for fans who visit the grave to leave baseballs, mitts, Cleveland Indians gear and other memorabilia. 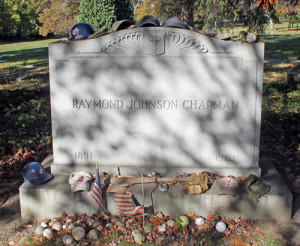