The baseball accomplishments of  Hall of Famer “Rapid Robert” Bob Feller are legendary. He is arguably the greatest right-handed pitcher ever to play the game of baseball.  Yet he may have been even a better man as his service in WWII shows. 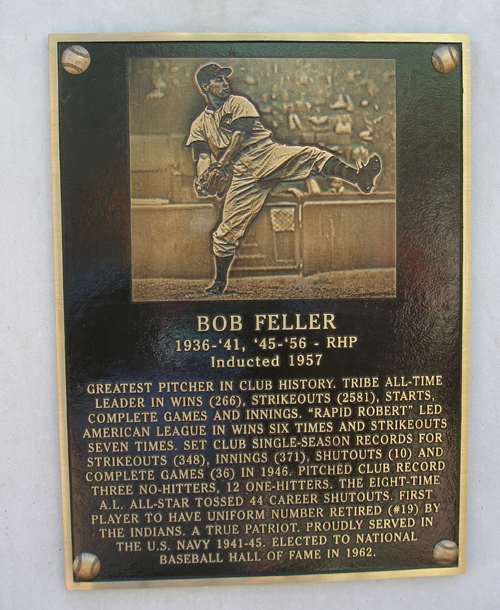 A prodigy who bypassed the minor leagues, Feller first played for the Indians at the age of 17. His career was interrupted by four years of military service in World War II, during which time he served as Chief Petty Officer aboard the USS Alabama. Feller became the first pitcher to win 24 games in a season before the age of 21. During his career, he threw no-hitters in 1940, 1946, and 1951. Feller also recorded 12 one-hitters (his no-hitters and one-hitters were records at the time of his retirement).

He helped the Indians win a World Series title in 1948 and an American League-record 111 wins and the pennant in 1954. Feller led the American League in wins six times and in strikeouts seven times. In 1946, he recorded 348 strikeouts, a total not exceeded for 19 years. An eight-time All-Star, Feller was ranked 36th on Sporting News’s list of the 100 Greatest Baseball Players and was named the publication’s “greatest pitcher of his time”. He was a finalist for the Major League Baseball All-Century Team in 1999. 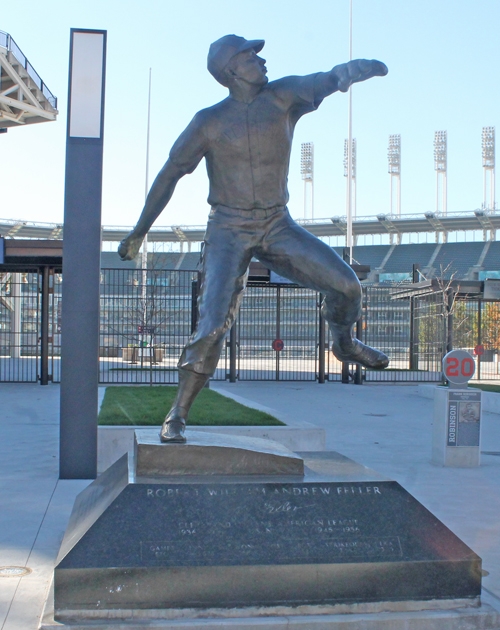 Baseball Hall of Fame member Ted Williams called Feller “the fastest and best pitcher I ever saw during my career.” and  Hall of Famer Stan Musial believed he was “probably the greatest pitcher of our era.” He was inducted into the Baseball Hall of Fame in 1962 on his first ballot appearance; at the time only three players ever had a higher percentage of ballot votes.

At only sixteen years of age he signed with Cleveland and pitched three innings in an exhibition game. In those three innings he struck out eight members of the St. Louis Cardinals. It was clear that Bob Feller would become one of the all time great pitchers in baseball. 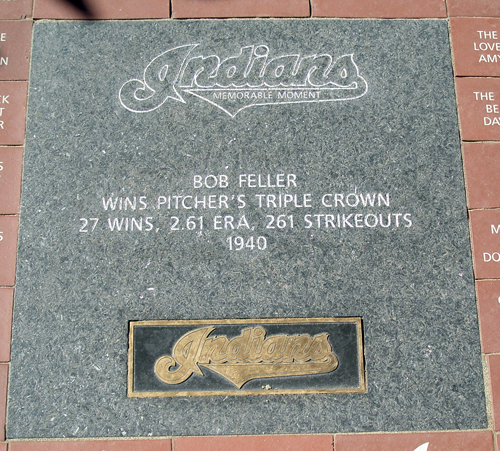 As a rookie he broke the American League record for strikeouts by striking out fifteen batters in a single game. At age 22 he became the first American League pitcher to throw a complete game no-hitter on Opening Day. There was no stopping Bob Feller – except Pearl Harbor.

His patriotism and unselfish service cost him 4 prime years and countless records.  When the attack was made on Pearl Harbor on December 7, 1941,  Feller heard about the bombing while returning from a visit to his terminally ill father.  Two days later, he volunteered for the United States Navy, becoming the first American professional athlete to enlist.  Although he had received a military exemption owing to his father’s failing health, he wanted to serve in combat missions.

Feller said, “I told them I wanted to … get into combat; wanted to do something besides standing around handing out balls and bats and making ball fields out of coral reefs.” Feller was assigned to the USS Alabama. Shortly before Feller left for combat, his father died of brain cancer in early January 1943. Feller served as Gun Captain aboard the Alabama and kept his pitching arm in shape by throwing near a gun turret.

Feller’s first taste of direct combat was at Operation Galvanic in November 1943. The Alabama also served during Operation Flintlock while primarily being used as an escort battleship in 1944. Feller participated in the Battle of the Philippine Sea before his combat duty ended in January 1945; he spent the rest of the war at the Great Lakes Naval Training Station as an instructor.

When the war ended, Feller was discharged as a Chief Petty Officer and decorated with six campaign ribbons and eight battle stars while serving on missions in both the Pacific and North Atlantic, and he was made an honorary member of the Green Berets later in life.

In 1948, the Indians had one of their finest seasons. Feller was selected to represent the AL All-Stars for the seventh time in his career in the 1948 All-Star Game but declined to play, feeling that his performance did not warrant selection as an All-Star. At one point he was winless for a month, and by July 22, his record was 9–12. Lou Boudreau, the Indians’ player-manager, declared “we sink or swim with Feller”, and continued to pick him.  Feller proceeded to go 10–3 for the remainder of his appearances to finish the season with a record of 19–15, a league-leading 164 strikeouts, and a 3.56 ERA. The Indians won a one-game playoff against the Boston Red Sox to determine the team to represent the AL in the World Series; it was the first time the team had won the pennant since the 1920 season. They went on to beat the Braves in the World Series. 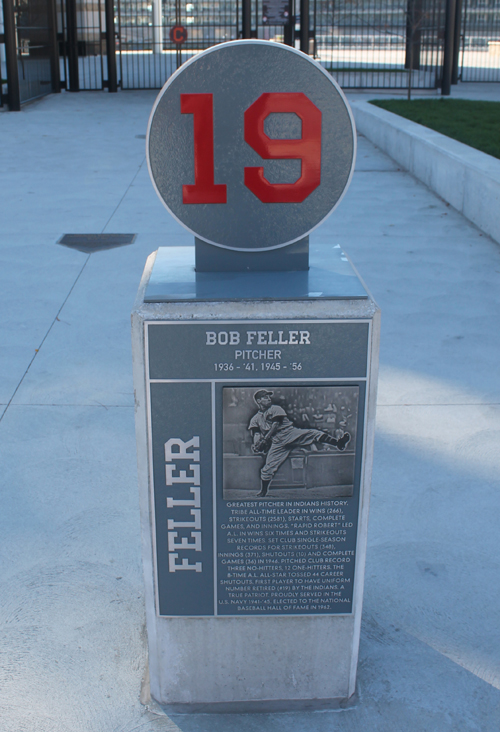 He spent his entire career of 18 seasons with the Indians, being one of “The Big Four” in the Indians’ pitching rotation in the 1950s, along with Bob Lemon, Early Wynn and Mike Garcia. Feller shares the Major League record of 12 one-hitters with Nolan Ryan, and was the first pitcher to win 20 or more games before the age of 21. He ended his career with 266 wins, 2,581 strikeouts and 279 complete games. The Indians retired his jersey number, 19, in 1957.[55]

In 1962, Feller was elected to the National Baseball Hall of Fame and Museum along with Jackie Robinson. Both were the first to be elected on their first ballot appearance since the original induction class of 1936. At the time of his induction only Ty Cobb (98.2%), Babe Ruth (95.1%), and Honus Wagner (95.1%) had a higher percentage of ballot votes.

When Feller died, Mike Hegan, Indians broadcaster and son of former Feller teammate and battery mate Jim Hegan, stated, “The Indians of the 40s and 50s were the face of the city of Cleveland and Bob was the face of the Indians. But, Bob transcended more than that era. In this day of free agency and switching teams, Bob Feller remained loyal to the city and the team for over 70 years. You will likely not see that kind of mutual loyalty and admiration ever again.”

See more about Bob Feller from a Cleveland interview