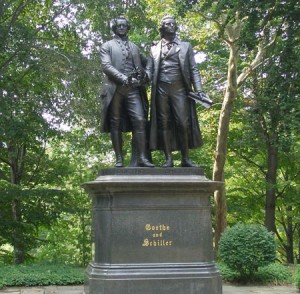 Johann Wolfgang von Goethe (1749-1832) was a German poet, novelist, playwright, courtier, and natural philosopher who may be best known for his poetic drama in two parts, Faust.

The original 1857 monument is in Weimar, Germany but four exact copies were commissioned by German-Americans in the United States in San Francisco (1901), Cleveland (1907), Milwaukee (1908), and Syracuse (1911). 65,000 people attended the dedication of the Cleveland monument.

The statue is 12′ tall and resides on a large base. 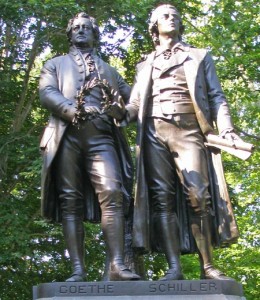 The German Cultural Garden is one of over 30 in the Cleveland Cultural Gardens chain. The German Garden, and the Goethe-Schiller monument and busts of Bach, Beethoven, Heinrich Heine, Father Jahn, Alexander Humboldt and more is on East Blvd. North of Superior and on the west side of the street. The German Garden also has a presence on the lower level on MLK Blvd. but the monument is on the upper level.