Previous methods of unloading lake freighters, involving hoists and buckets and much hand labor, cost approximately 18¢/ton. Unloading with Huletts cost only 5¢/ton. Unloading only took 5–10 hours, as opposed to days for previous methods. Lake boats changed to accommodate the Hulett unloader, and became much larger, doubling in length and quadrupling in capacity. 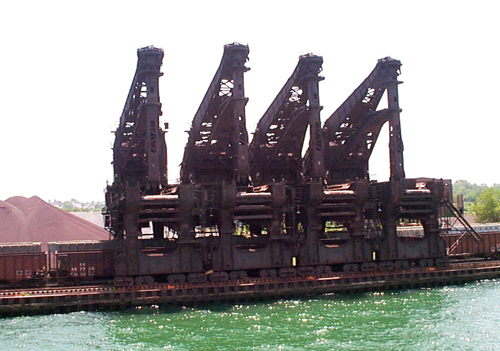 Hulett machines in Lake Erie at Whiskey Island in Cleveland (1999)

The Hulett Automatic Ore Unloader was invented by George H. Hulett, a native of Ohio, in the late 1800’s. He received the patent for this invention in 1898 and the following year the first working model was built at Conneaut Harbor in Conneaut, Ohio. It was constructed by the Webster, Camp & Lane Company of Akron. 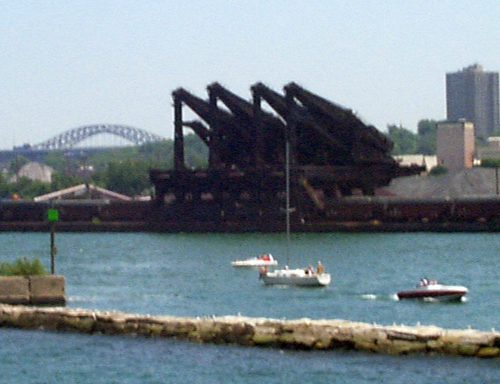 The Hulett Automatic Ore Unloader became an essential element in the development of the iron ore industry in Ohio, allowing rapid unloading of cargos and increasing the volume and efficiency of ore docks at Ohio ports such as Ashtabula, Cleveland, Conneaut, Huron, Lorain, and Toledo.

The machines remained in use, with few changes, until 1992 when self-unloading boats became standard on the American side of the lake. Huletts were then considered too expensive to operate and maintain and most were scrapped.

By 1999, six still stood as reminders of their domination of iron ore unloading. Four of these six were located on Whiskey Island at Cleveland, Ohio and were recognized as “Historic Mechanical Landmarks” by the American Society of Mechanical Engineers in 1998. In spite of that, In 2000, the remaining Huletts were demolished by the Cleveland Port Authority except for two, which were disassembled and retained in hope of 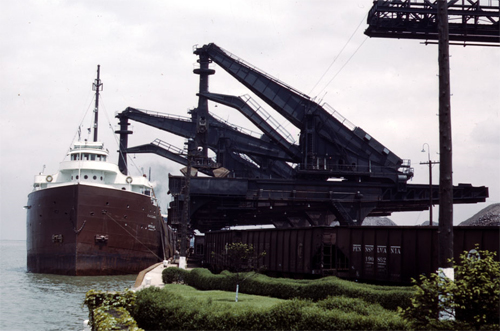 Huletts at the PRR ore docks at Cleveland. The near Hulett is discharging into the hopper, while the next is lowering its bucket into the hold.