Garret A. Morgan was an inventor and community leader.  Morgan is also credited as the first African American in Cleveland to own an automobile.

In 1895, he moved to Cleveland where he began repairing sewing machines for a clothing manufacturer. His first invention, developed during this period, was a belt fastener for sewing machines. Throughout this period of time, before his first patent in 1912, he was slowly building his reputation in Cleveland for his skill at fixing things. 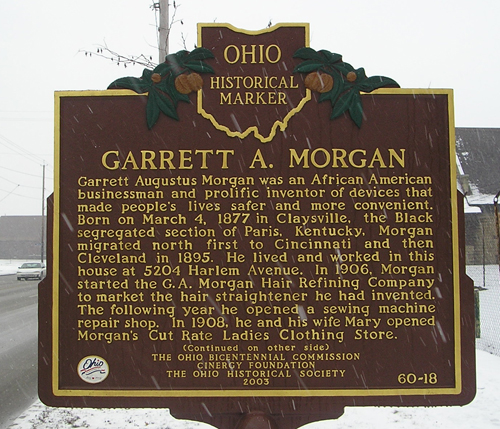 Garrett Morgan invented a safety hood smoke protection device after seeing firefighters struggling from the smoke they encountered in the line of duty. Garrett Morgan’s refined replica of his smokehood and protector was used by the United States Army in World War I. A gold medal was awarded Morgan by the International Association of Firechiefs for this safety device.

With automobiles now sharing the road with pedestrians, bicycles and animal-drawn wagons, a number of versions of traffic signaling devices began to be developed, starting around 1913. Morgan had witnessed a serious accident at an intersection, and he filed a patent for traffic control device in 1922.  In 1923, the U.S. Patent Office granted Patent No. 1,475,074 to Garrett Morgan for his three-position traffic signal. Though Morgan’s was not the first traffic signal (that one had been installed in London in 1868), it was an important innovation nonetheless: By having a third position besides just “Stop” and “Go,” it regulated crossing vehicles more safely than earlier signals had. 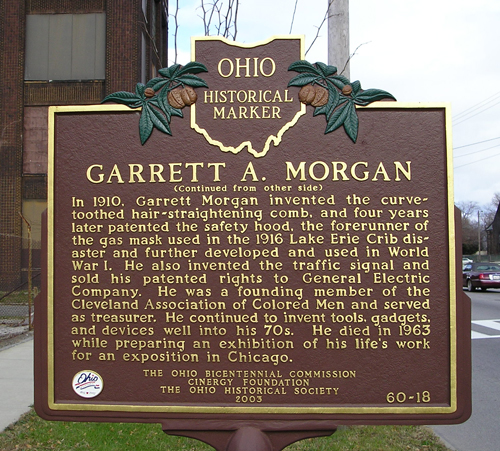 The Garrett A. Morgan Cleveland School of Science and the Garret A. Morgan Water Treatment Plant have been named in his honor. He is buried in Lakeview Cemetery in Cleveland.

His home and the historical marker are at 5204 Harlem Ave. in Cleveland.